A pent-up urge to travel is pushing tourist numbers in southern Europe back to pre-pandemic highs. But understaffed resorts and overwhelmed airports are thwarting many tourists’ desire for a stress-free break in the sun.

Severe peak-season labor shortages caused by an exodus of workers during a virtual industry shutdown in 2020, and only a partial recovery last year, are forcing tour operators in Spain, Italy, Greece and Portugal to offer better wages and conditions, increase prices and cut services.

“The era of fast, frequent and cheap vacations is over,” said Cristina Siza Vieira, executive vice president of the Portuguese Hoteliers Association, adding that workers “often find that they can earn more in jobs that leave them free. evenings and weekends. Hotel owners on Portugal’s Algarve coast said a lack of staff has forced them to turn down weddings and christenings, suspend beach transfers and spa massages for guests, and reduce the opening hours of bars and restaurants. .

More than 400,000 vacancies in the tourism industry in the southern eurozone countries need to be filled, according to estimates by local organizations and trade unions. Staff shortages have pushed many hotels and restaurants to the brink and forced others to close. Tourists flying to southern European resorts are also bearing the brunt of rising jet fuel costs and severe disruptions at many airports.

Marina Lalli, president of Italy’s National Federation of Travel and Tourism Industries, said labor shortages had become the “number one problem” facing the sector after many workers who were furloughed or lost their jobs during the pandemic decided to leave the sector. 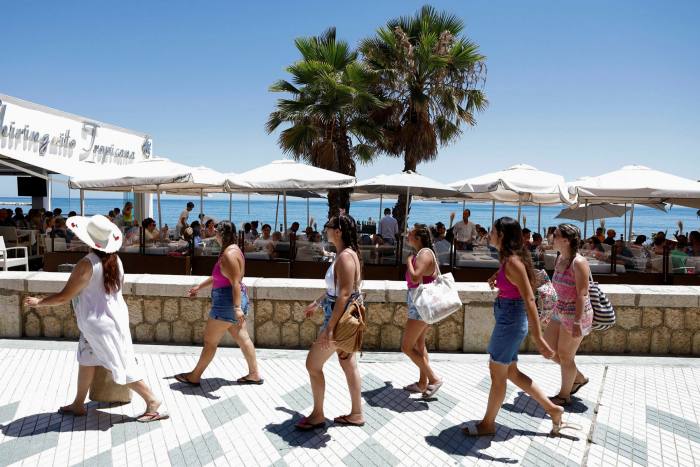 Tourism jobs in Europe fell 9.3 percent in 2020, according to the World Travel and Tourism Council, with the outbreak of the Omicron variant of the coronavirus in late 2021 curtailing demand for new hires.

Many have moved into delivery, ride-sharing, construction, storage and other areas less affected by seasonality or the risk of another wave of Covid-19, Siza Vieira said.

The pandemic was a “hammer blow” to Barcelona’s tourism sector, said Kate Preston, who was forced to close three of the eight restaurants she ran in the Catalan city. By reducing her employees from around 150 to 110 who work five days a week, she has managed to avoid a serious staffing shortage. But many former tourism workers had found “other ways to make a living,” she added. Working in tourism can be “really stressful,” Lalli said, with some employees “doing jobs that would have been done by multiple people years ago.” Many employees returning to the sector wanted to work part shifts and not at night or on weekends, she said.

George Valsamis, CEO of Secret Hotels, a boutique chain on the Greek island of Santorini, has struggled to fill vacancies this season.

“What we are living [with staff shortages] It is the result of over-tourism. The Greek islands do not have the capacity to serve so many people,” he said. More than 50,000 of the 250,000 jobs needed for the country’s hotel staff remain vacant, according to the Greek Tourism Confederation.

Competition for workers is fierce, and normal experience and training requirements are often waived. Overburdened employees are used to working long shifts seven days a week, but Greek tourist boards have also highlighted the deterioration of workers’ housing, particularly on holiday islands like Mykonos and Santorini, where the local group of workers it is small and most accommodation is for rent. to the tourists.

You are viewing a snapshot of an interactive chart. This is most likely because you are offline or JavaScript is disabled in your browser. 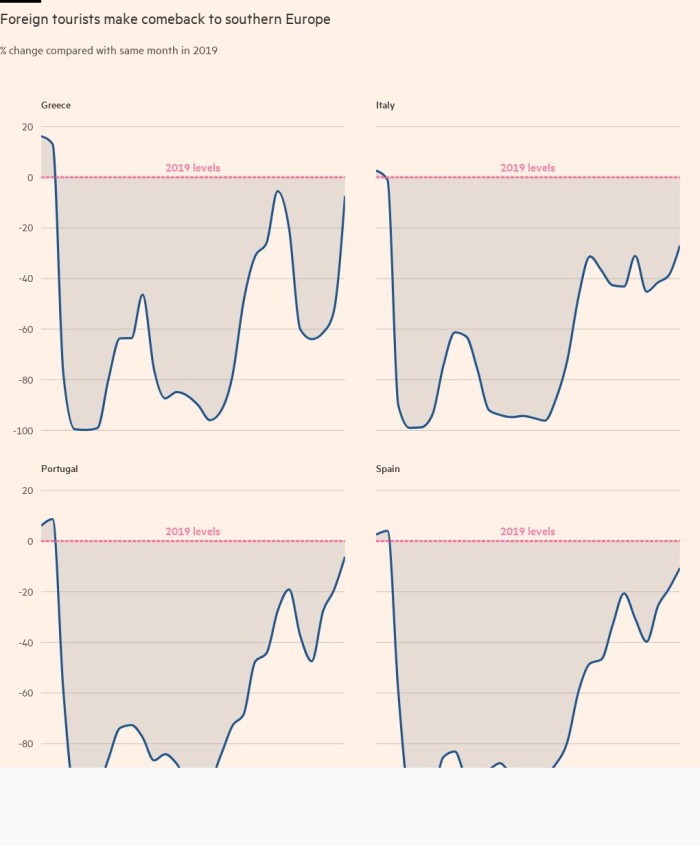 “We fight during the ‘year zero’ of tourism in 2020 and again in 2021 to help companies survive and avoid job destruction,” said María Frontera, president of the Association of Hoteliers of Mallorca, the largest of the Islands. Balearic Islands of Spain. “Now we have to address the issues of recruiting, training and retaining talent.”

The pandemic has highlighted long-standing structural imbalances in the sector’s labor market, said Inmaculada Benito, director of tourism at the CEOE, Spain’s main employers’ organization, including for aging populations. “Of every 100 people who leave the sector, only 80 enter,” she said.

Operators across Europe also complain about labor laws and union rigidities that can, for example, prevent a kitchen worker from being transferred to the cleaning service.

Officials say peak summer tourist numbers are returning to 2019 levels in most of southern Europe, and tourists are not put off by the impact of skyrocketing inflation. “The desire to travel is strong and tourists don’t care too much about prices,” said Benito. “This helps lessen the impact of staffing shortages on revenue. But reductions in services generally lead to lower prices.

The industry is pressing governments to ease visa regulations to ease the entry of workers abroad, mainly from Latin America and North Africa. “Europe will not survive without immigrants,” said Siza Vieira.

Politicians in countries dependent on tourism have also stressed the need to improve conditions in the sector. “Tourism must be attractive not only to visitors, but also to workers,” Greek Prime Minister Kyriakos Mitsotakis told industry executives at a conference last month. “This points to better wages and working conditions.”